This Minecraft Dungeons article is a stub.
You can help by expanding it.
Jack o' Lantern 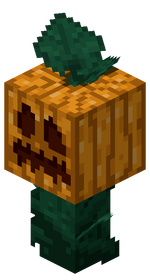 The Jack o' Lantern, also known as Jack o' Lantern Trap, was a planned mob for Minecraft Dungeons, but was scrapped mid development. It's based off of the original game's Jack o'Lantern.

The Jack o' Lantern is a plant-based mob composed of a carved pumpkin in which the face lights up when attacking, it also has a green stem below it and leaves above the carved pumpkin head.

The only proof of its existence were its texture files, model, and images and footage of it being hacked into the player's camp, and certain custom maps prior to the release of Jungle Awakens.

The Jack o' Lantern would attack by throwing incandescent pumpkin seeds at the player. While not attacking, the jack o' lantern would stay underground, with only the pumpkin outside.