This article is a work in progress.
Please help in the creation of this article by expanding or improving it. The talk page may contain suggestions.
Iron Hide Amulet 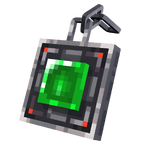 The Iron Hide Amulet is an artifact in Minecraft Dungeons used to buff the player's defense.

The Iron Hide Amulet when used, provides a major boost to defense for a short time. It's identical to that of the Oakwood Brew.

Testing has shown the damage reduction is 50%. (A normal Zombie hits for 8 damage. With the Iron Hide Amulet active, the damage is reduced to 4)

This effect stacks with the damage reduction from armor such as Reinforced Mail or the Mercenary Armor, which means damage from Zombies will be reduced to 3 with both effects active. The effect also stacks with the Protection enchantment.

The cooldown of Iron Hide Amulet is 25 seconds fixed.