This page describes content that is a part of the Creeping Winter DLC.
Icy Creeper 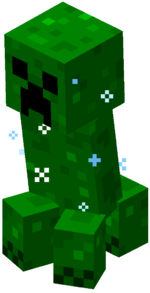 The Icy Creeper is a cold variant of the Creeper. Unlike the normal Creeper found in the mainland of Minecraft Dungeons, it is seen emanating snowflakes from its body, as well as a cold, blue mist. When it explodes, a freezing sound is heard and the spot where it blew up will freeze momentarily. Its explosion is bluish in color.

It behaves similarly to a regular Creeper in Minecraft Dungeons, walking towards the player and exploding, but their explosions produce a snowy mist and can slow down players and the explosion deals less damage then a normal creeper.

This page would benefit from the addition of more sounds.
Please remove this notice once you've added suitable sounds to the article.
The specific instructions are: walking, hissing, death, hurt, idle.[verify]