This article is a work in progress.
Please help in the expansion or creation of this article by expanding or improving it. The talk page may contain suggestions.
Hunting Bow 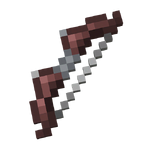 A hunting bow is a ranged weapon in Minecraft Dungeons that fires one chargeable arrow. Its unique variants are the Master's Bow, the Hunter's Promise, and the Ancient Bow.