This article is a work in progress.
Please help in the expansion or creation of this article by expanding or improving it. The talk page may contain suggestions.
Hunter's Armor 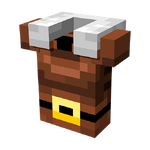 The Hunter's Armor is a common armor set in Minecraft Dungeons that can be equipped for protection. Its unique variant is the Archer's Armor.

The Hunter's Armor can be used to defend attacks from hostile mobs.