This page describes content that is a part of the Hidden Depths DLC.

Hidden Depths is a paid DLC for Minecaft Dungeons released on May 26, 2021, the 1st year anniversary of Minecraft Dungeons.[1][2][3][4] It is the fifth DLC in Minecraft Dungeons, and takes place in an Ocean biome. Showcased at Minecraft Live 2020, it is the third Season Pass DLC after Howling Peaks and Flames of the Nether. 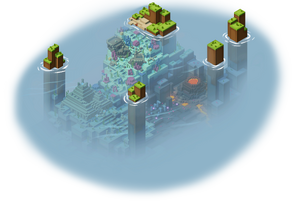 The Hidden Depths take place underwater, around a small group of islands. Underneath the largest island is a ridge filled with a coral reefs and a shipwreck, on the west and deeper below is an abyssal monument which harbors an Ancient Guardian, and on the east is an underwater volcano surrounded by lava, glowing underwater lanterns, and a large fossil. The levels in the Hidden Depths are huge when compared to other levels, with about fifteen secrets in the Coral Rise alone. There is a cutscene in the Abyssal Monument, which the Ancient Guardian breaks through its own lair, and starts the boss fight. This currently is the only boss fight with a cutscene, apart from the Heart of Ender.

The following is included in this DLC pack:

Mobs that were in the Mainland or previous DLC: