This Minecraft Dungeons article is a stub.
You can help by expanding it.
Hex 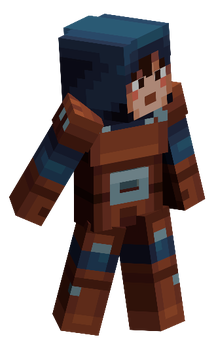 Hex is a skin in Minecraft Dungeons. They are one of the four main heroes, along with Adriene, Hal, and Valorie.

They are seen in the Official Dungeons Banner and the Rise of The Arch-Illager cover wearing Scale Mail and wielding a pair Daggers. They are also seen in the Official Launch Trailer wearing Dark Armor and equipped with Sickles. The skin in general seems to be wearing a dark blue hoodie with a brown vest, gloves, boots and a belt, with small pixels of metal. They have a large iron belt buckle on their belt. They also have tan skin, brown hair, and brown eyes.

Hex appears in The Rise of the Arch-Illager, nicknamed "Scarface" by Karl, (hence their scar). Hex intervenes when Karl attempts to attack the Arch-Illager. On the cover on the book, they are seen wearing the Scale Mail and holding the Daggers.