For the final boss of the Echoing Void DLC, see MCD: Vengeful Heart of Ender.

This page would benefit from the addition of isometric renders.
Please remove this notice once you've added suitable isometric renders to the article.
The specific instructions are: Attacking model
Heart of Ender 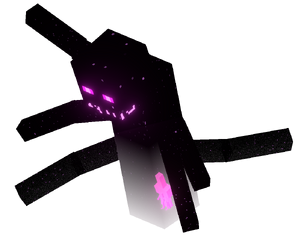 The Heart of Ender, otherwise known as the Arch-Visage and the Arch-Vessel is the final boss of Minecraft Dungeons. It appears in the Obsidian Pinnacle after defeating the Arch-Illager. It is the last boss in the main game, not counting the DLC bosses or the Mooshroom Monstrosity.

The Heart of Ender is the manifestation of the voice that the Orb of Dominance speaks to the Arch-Illager with, as seen in the book The Rise of the Arch-Illager. Through the various actions Archie committed during his reign as the Arch-Illager, it can be assumed that the Heart of Ender is vile, sadistic, cruel, and merciless, akin to an embodiment of pure evil itself. It shows no remorse or guilt for its actions, as shown by Archie’s personality when he was a proxy to the orb. Its main goal is the complete submission and loyalty of all living beings, no matter what is necessary to accomplish its desires. The only other emotion equal to its cruelty is its hatred towards its enemies, a hatred so strong that it continues to burn postmortem. This said hatred can sometimes eclipse its intelligence, as its shattered conscience was willing to spread its corruption throughout the land even though those actions put its well being at risk. Its arrogance eventually came to head when its desires of revenge revealed to the world that it survived and had been reborn and currently residing in The End. Another example is that when reborn, it was willing to destroy the very world it wished to control.

The Heart of Ender is a large, half translucent hostile mob that resembles an Enderman. Its head is similar to an Enderman's, but it is slightly elongated and has a more toothy mouth. It has six tendril-like appendages attached to its torso, which also give the Heart of Ender the ability to crawl. It also appears to fade out near its bottom, where the Arch-Illager is preserved with the Orb of Dominance inside its mouth.

The Heart of Ender has 4 different attacks. The first three are used in order, while the fourth is used between each attack. Its attacks are the most powerful in the game, capable of draining the player's health pool within a second.

The Heart of Ender leans back and spits out a cluster of replicas of the Orb of Dominance from its mouth. When a replica touches the ground, it explodes in a small radius, leaving behind purple flames that damage players on contact. This attack is followed up almost immediately with an Ender Deathrays attack.

The Heart of Ender raises up and fires 4 purple beams from its stomach in a plus formation, which spin clockwise, dealing massive damage on contact. It is its most powerful attack. It is also its most dangerous attack. This attack is followed up almost immediately with an Ender Visage attack.

In between the above attacks, the Heart of Ender sometimes "crawls" around the arena, leaving a trail of a black, void-like substance behind it, which deals light damage to the players on contact.