This Minecraft Dungeons article is a stub.
You can help by expanding it.
Hal 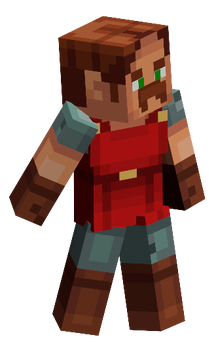 Hal is a hero in Minecraft Dungeons and one of the four main heroes of the game. His friends are Valorie, Hex and Adriene. He is the only male among the main four. He appears in all DLC banners except for the Flames of the Nether and the Hidden Depths banner.

Hal appears in the Minecraft Dungeons novel, The Rise of the Arch-Illager, nicknamed "Stache" (hence his facial hair) by Karl, since Karl forgets and doesn't care about his name, even though Hal constantly corrects him. Hal intervenes when Karl plans to attack the Arch-Illager. On the cover of the book, he can be seen wearing the Evocation Robe and holding a Lightning Rod.

Hal’s most notable physical trait is his brown mustache. He also has brown hair and a light skin tone in addition to green eyes. He wears a red tunic and a brown belt with a gold buckle as well as also wearing brown gloves and brown boots.