This article is a work in progress.
Please help in the expansion or creation of this article by expanding or improving it. The talk page may contain suggestions.
Gong of weakening 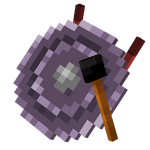 The gong of weakening is an artifact that can be found within the various missions of Minecraft Dungeons.

When used, it weakens enemies in a 7-block radius around the hero, making them take 3 times more damage and deal 25% less damage.