This page describes content that is a part of the Howling Peaks DLC.
Goat Gear 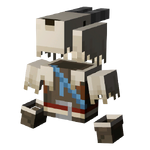 Goat Gear, formerly known as Mountain Goat Armor, is an armor set in Minecraft Dungeons in the Howling Peaks DLC. It is a unique variant of the Climbing Gear.