Edit
This article is about the Minecraft Dungeons mob. For the cosmetic pet, see MCD:Baby Goat. For the mob within the original game, see Goat.

This page describes content that is a part of the Howling Peaks DLC.
Goat 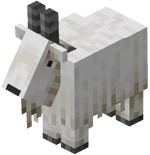 A goat is a neutral animal that can be found within the howling peaks DLC of Minecraft Dungeons.

Goats look mostly the same as they do within the original game, with the only difference being a darker texture and having their legs being a bit further away from the stomach.

The windbeard is an ancient goat that can be encountered during ancient hunts with the minimum offering of the following runes:

The windbeard is immediately hostile and attacks heroes without provocation, unlike normal goats. The ancient resides within a Windswept Peaks-themed arena and possesses, at minimum, the following enchantments:

Upon defeating the windbeard, a gilded variant of the following items drops as a reward: