This article is a work in progress.
Please help in the expansion or creation of this article by expanding or improving it. The talk page may contain suggestions.
Glaive 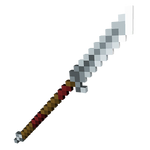 A glaive is a melee weapon in Minecraft Dungeons. They are commonly used by skeleton vanguards. Its unique variants are the Grave Bane, the Venom Glaive, and in the Spookier Fall event, the Cackling Broom.