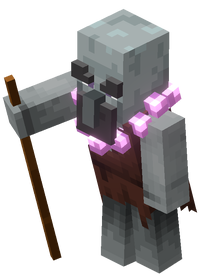 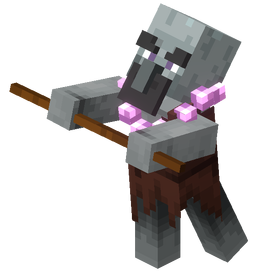 A geomancer is an elderly illager and hostile mob that has the ability to block and attack heroes by summoning stone walls and explosive walls found in Minecraft Dungeons.

The geomancer is an illager mage that has a thick beard and eyebrows. It wears dark brown ragged clothing and an amethyst necklace around its neck. It is often seen with a walking stick and it uses this to summon walls of stone. Unlike other illagers, the geomancer has purple eyes instead of the normal blue or green eyes.

Between creating pillars, it tries to stay away from the hero by slowly walking. Geomancers raises two types of pillars out of the terrain using magic to assist other mobs.

Geomancers summons geomancer walls strategically to assist the other enemies and block heroes. After five seconds, it descends back into the ground.

Geomancers summons geomancer bombs close to the hero. After five seconds of continually sprouting orange cracks, it explodes with high damage within a small radius.

A geomancer wall is a non-attackable hostile mob summoned by geomancers.

It is simple, rusty, stone-like, and has a creeper face. If summoned underground, it glows red.

It can damage mobs that happen to walk through it.

A geomancer bomb is a non-attackable hostile mob summoned by geomancers.

Geomancer bombs are dark and stone-like. They have four faces, a happy and angry side, with a rune on its head.

Geomancer bombs may be disarmed with a chunk of ice from an ice wand.

The Frostwarden is the ancient variant of the geomancer encountered during Ancient Hunts with the minimum offering of the following runes:

This ancient resides within a Frosted Fjord-themed arena and possesses, at minimum, the following enchantments:

Upon defeating the Frostwarden, a gilded variant of the following items drop as a reward:

Issues relating to "Geomancer" are maintained on the bug tracker. Report issues there.