This page describes content that is a part of the Creeping Winter DLC.
Frozen Zombie 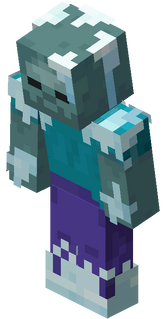 In addition to behaving like a normal zombie, the frozen zombie can also attack players from a distance with snowballs to inflict players with slowness for a short duration. They can also charge and attack the freezing player like how spiders attack the player trapped in the web.