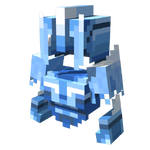 This page describes content that is a part of the Creeping Winter DLC.

Frost Armor is an armor in the Minecraft Dungeons DLC Creeping Winter. It is a unique variant of Snow Armor.