This article is a work in progress.
Please help in the expansion or creation of this article by expanding or improving it. The talk page may contain suggestions.
Note:
Not to be confused with MCD:Arctic Fox.
Fox 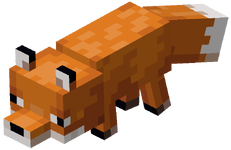 The fox is a pet mob that is obtainable within the Cloudy Climb seasonal adventure. It has a variant that was added previously within the Creeping Winter DLC. The fox also makes an appearance in the Arcade spin-off as a summonable mob. It was originally seen in the Cross Platform Play Trailer, long before it was officially added.

The fox follows the hero. It cannot do anything except for a few actions, such as triggering pressure plates.

In the Arcade spin-off, the fox attacks mobs by biting them, as well as following the hero.

The fox can be obtained as a reward at the adventure hub during the Cloudy Climb.