This article is a work in progress.
Please help in the expansion or creation of this article by expanding or improving it. The talk page may contain suggestions.
Fishing Rod 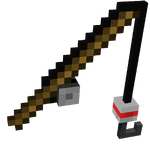 The Fishing Rod is an artifact in Minecraft Dungeons used to pull mobs closer to the player, stunning the mob. It has a long delay time but is useful on bosses that can move. It can also be used to drag dropped items towards the player.

Locations
Listed difficulties are considered to be the minimum difficulty the item is obtainable on unless stated otherwise.

Pulls the closest mob in range to your position, briefly stunning that enemy. Due to a bug, it could be used on target dummies in certain versions of the game.