This Minecraft Dungeons article is a stub.
You can help by expanding it.
Fire Trail 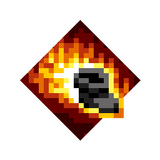 Fire Trail is an enchantment in Minecraft Dungeons that ignites fire behind the player whenever they roll. It lasts for four seconds before extinguishing. The amount of damage the fire deals increases with each tier. It is the natural enchantment of the Ghost Kindler.