Minecraft Dungeons:Eye of the Guardian

This page describes content that is a part of the Hidden Depths DLC.
Eye of the guardian 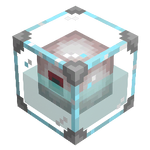 The eye of the guardian is an artifact that can be found within the hidden depths DLC of Minecraft Dungeons.