This article is a work in progress.
Please help in the expansion or creation of this article by expanding or improving it. The talk page may contain suggestions.
Exploding Crossbow 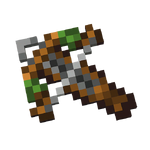 The Exploding Crossbow is a ranged weapon in Minecraft Dungeons that fires one arrow that explodes on impact. Its unique variants are the Imploding Crossbow and the Firebolt Thrower.

The Exploding Crossbow possesses very high power, very low speed, and a very small ammo supply. The quiver starts with 20 arrows, normal arrow bundles give 10 arrows, supply chest bundles give another 20 arrows, and Surprise Gift bundles give 5 arrows. The exploding crossbow is a little smaller than most crossbows.

Crossbows can be shot repeatedly if the ranged attack button is held down. Ranged weapons require the player to have at least one normal arrow or a special arrow from a quiver artifact in their inventory to shoot. Unlike bows, shots from crossbows cannot be charged.

Damage caused by the arrows can be increased with enchantments, the Strength buff, and certain armors that have ranged damage increases, such as the Hunter's Armor. Also, it is the only ranged weapon in the game that is unaffected by the Deflect enchantment.