From Minecraft Wiki
Jump to: navigation, search
This article is about the miniboss in Minecraft Dungeons. For the spellcasting illager mob, see Evoker.
Evoker 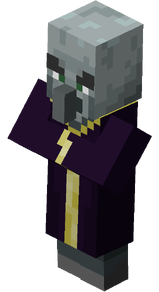 The Evoker is an illager and a mini boss found in Minecraft Dungeons. When spawned, a music soundtrack plays.

It appears frequently on lower difficulties and appears as a boss in the Pumpkin Pastures, sometimes in the Colossal Rampart, Woodland Mansion, and sometimes in the Woodland Prison. It even spawns in levels where illagers are not normally found like the Desert Temple and the Lower Temple. It can also appear as a standard mini-boss during Ancient Hunts.

The evoker has two attacks. It starts by summoning a stream of fangs then calls in a group of vexes. While not attacking, it attempts to stay a certain distance from the players by running.

The evoker raises its hands, enveloped in a yellow aura, then lowers them, summoning a stream of fangs out of the ground to hurt approaching players by snapping shut. The fangs appear in one of the three formations. The first is a line of 7 fangs from the evoker towards the targeted player, the second is a circle of 12 fangs around the evoker, and the third is simply fangs scattered around the evoker. This is its most powerful attack. 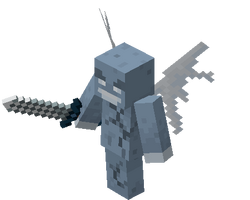 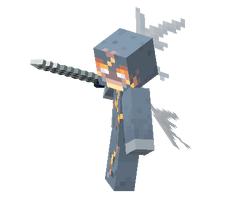 The evoker raises its hands, enveloped in a purple aura, summoning 4 vexes in a circle around it.

In the Novel[1] and Archie's Origin, two evokers were confirmed to have their real name: