This page describes content that is a part of the Echoing Void DLC.

This page would benefit from the addition of isometric renders.
Please remove this notice once you've added suitable isometric renders to the article.
The specific instructions are:
Endersent 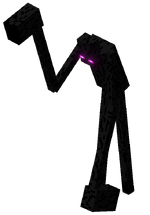 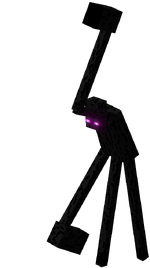 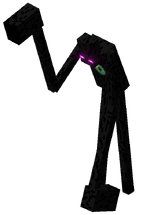 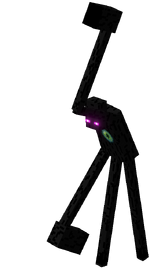 The Endersent are powerful mobs added in the Echoing Void DLC.

The vengeful heart of ender sent six enchanted Endersent to the Overworld to guard six eyes of ender. They hold down secluded, underground, void-torn arenas across the mainland. They are called the Savage Eye, Ravenous Eye, Blight Eye, Reaping Eye, Blinding Eye, and the Spiked Eye.[1]

The Endersent are giant monsters of similar colors and proportions to the enderman. The Endersent have long foreheads, elbows, and club-like hands. Each of the six enchanted Endersent guards an eye of ender in its chest.

The Endersent have the highest brute strength of any powerful mob in Minecraft Dungeons, doing more damage than the redstone golem but having less health. Like watchlings and endermen, the Endersent can pick up key golems. They have four attacks.

The Endersent smashes the ground with one arm.

The Endersent swats an arm at the hero instead of its ordinary basic attack.

The Endersent smashes the ground with both hands, dealing massive damage, then it teleports away, summoning one to four watchlings in its place. After a moment, the Endersent teleports back to where it originally spawned.

The Endersent raises one arm at a random hero or summoned mob then teleports away, reappearing behind its target and smashing the ground with both arms. This deals massive damage, though less than deadly escape.

Each of the six eyes of ender is guarded by a unique enchanted Endersent that isn't seen again once the eye is collected. They spawn in six locations across the mainland as powerful mobs. Heroes must defeat them to obtain the eyes of ender necessary to activate the End portal.[1]

The enchanted Endersent does not spawn again once its eye is collected. Its place is taken by an ordinary endersent with no eye of ender in its chest.

On each path leading to the enchanted Endersent, there can be one or two endermen as powerful mobs that spawn in small ambushes. If the mission was already completed, Raid captains also spawn commonly near the arenas.

The Savage Eye is encountered in a secret area within the Pumpkin Pastures. It is found in a small underground arena and has at least the following enchantments:

To find it, heroes must journey to the stone brick rampart where the rune chamber is. After sighting this structure, heroes may find this endersent arena. However, the arena can rarely spawn later in the mission.

The Ravenous Eye is encountered in a secret area within Highblock Halls. It is found in a small underground arena and has at least the following enchantments:

To find it, heroes must journey to the buffet area. There is a path leading away from the main objective which appears to be the kitchen area of Highblock Halls. At the end of this path, heroes may find this endersent arena.

The Blight Eye is encountered in a secret area within the Soggy Swamp. It is found in a small underground arena and has at least the following enchantments:

The Reaping Eye is encountered in a secret area within the Desert Temple. It is found in a small underground arena and has at least the following enchantments:

To find it, heroes must journey to the room directly before the Nameless One boss fight. Near the north of the room, a path leads away from the objective. The path would eventually lead heroes into a cave with many traps, including a unique spike trap. At the end of this cave, heroes may find this endersent arena.

The Binding Eye is encountered in a secret area within the Cacti Canyon. It is found in a small underground arena and has at least the following enchantments:

To find it, heroes must journey past the chest pond. There is a path marked by stone brick leading to the left of the mission, away from the objective. This path can spawn almost at any point between the chest pond and the fossil area. The path leads to an underground structure with some traps. To pass through this, heroes must find three key golems. After opening all the locked gates, heroes may find this endersent arena.

The Spiked Eye is encountered in a secret area within the Creeper Woods. It is found within a small underground arena and has at least the following enchantments:

To find it, heroes must journey to the objective to free the lone villager. To the right of the objective, there is a path leading to a dark cave that is marked by a large stone enderman head. Upon reaching the end of the cave, heroes may find this endersent arena.