This page describes content that is a part of the Echoing Void DLC.
End Rogue 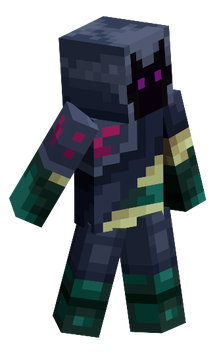 The End Rogue is an unused hero in Minecraft Dungeons believed to have been obtainable within the Echoing Void DLC, though like the Nether Warrior, it was rendered unused, probably due to both being made quite early, and then scrapped for the new, more updated heroes.

The skin has similarities to Wargen, who comes with the Hero Pass, with no visible face, a hood, and purple glowing eyes.