This page describes content that is a part of the Howling Peaks DLC.
Enchanter's Tome 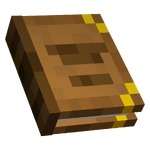 The enchanter's tome is an artifact added in the Minecraft Dungeons DLC Howling Peaks, where it is used to give allies various buffs.