This article is a work in progress.
Please help in the expansion or creation of this article by expanding or improving it. The talk page may contain suggestions.
Note:
Enchanter 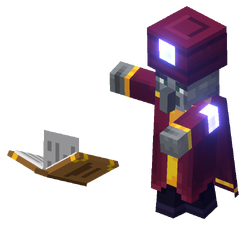 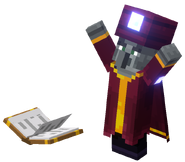 An enchanter is a hostile illager that can be found within the various missions of Minecraft Dungeons.

The common garb that enchanters wore on a daily basis consisted of a wine-colored robe and cape, each outlined with a golden trim. much like that of an evoker, though the robe also had diamonds engraved into the shoulders. In addition, enchanters each possessed a turban-like hat with a diamond in the center and carried around an enchanter's tome to enchant nearby mobs; such as controlling villagers in their hostage and slave operations"Untitled" . . They closes their hands much like evokers and illusioners when standing idle.

Enchanters are relatively weak, non-combative, and slow. Instead they mostly cast spells to make any allies stronger.

Enchanters hit and chase a target with their tome if they get too close (2~3 blocks), dealing light damage.

Enchanters enchant up to two nearby mobs individually, increasing their stats and applying the Double Damage or Fast Attack enchantments onto them. An enchanted beam links an enchanter with a targets. If a target strays too far or an enchanter is defeated, the enchantment ends on that target. Enchanters cannot enchant other enchanters. Enchanting geomancers and iceologers doubles the damage of their geomancer bombs and ice chunks.

The idle, hurt and death sounds of the enchanter include distorted villager sounds.[1]

The first enchanter is an ancient enchanter that can be encountered during ancient hunts with the minimum offering of the following runes:

This ancient resides within an Arch Haven–themed arena and has at least the following enchantments:

Ten enchanted husks act as the ancient's minions, each with the swirling enchantment.

Upon defeating the first enchanter, a gilded variant of the following items drops as a reward:

Issues relating to "Enchanter" are maintained on the bug tracker. Report issues there.