This page describes content that is a part of the Howling Peaks DLC.
Emerald Gear 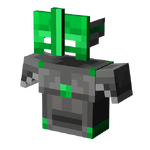 Emerald Gear, formerly known as Emerald Armor, is an armor set in Minecraft Dungeons available in the Howling Peaks DLC. It has two unique variants, the Opulent Armor and the Gilded Glory.