This article's name is unofficial.
An official name is yet to be given to the subject matter. Please add an official name when reliable sources confirm it.

This article is a work in progress.
Please help in the expansion or creation of this article by expanding or improving it. The talk page may contain suggestions.
Note:
Elite Skeleton

An elite skeleton [unofficial name] is a slightly rare and stronger type of skeleton found in Minecraft Dungeons.

Elite skeletons resemble normal skeletons, but are slightly taller than average. They noticeably have more health due to their armor. They have two variants, one with a power bow and one with a bow They also wear reinforced mail, which can appear wearing either both helmet and chestplate or just helmet. In the Arcade game, a third variant spawns exclusively there where they instead use melee weapons for melee damage.

Elite skeletons spawn when night falls, regardless of the mission, when at least one hero dies in multiplayer.

Elite skeletons are hostile towards heroes and will shoot them on sight, just like their normal counterparts.

This article's name is unofficial.
An official name is yet to be given to the subject matter. Please add an official name when reliable sources confirm it.
Melee Elite Skeleton 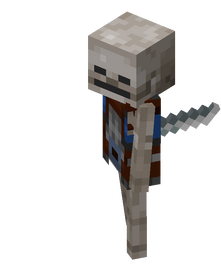 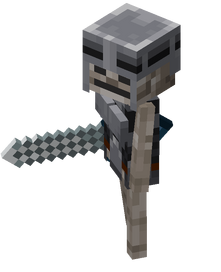 A Melee Elite Skeleton [unofficial name] is a melee variant of the normal elite skeleton that spawns exclusively within the Arcade edition.

Melee Skeleton Brutes are hostile towards heroes and will attack them on sight, just like their normal, bow wielding counterparts.

The Barrage is the ancient variant of the elite skeleton encountered during Ancient Hunts with the minimum offering of the following runes: