This article is a work in progress.
Please help in the creation of this article by expanding or improving it. The talk page may contain suggestions.
Notes: More info upon release.

This page describes content that is a part of the Hidden Depths DLC.
This feature may be added to the game in the future.
Drowned 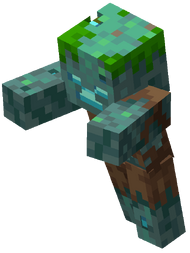 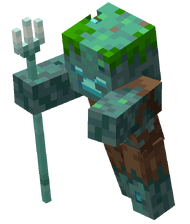 Drowned are hostile mobs that will appear in the upcoming Hidden Depths DLC for Minecraft Dungeons. Currently, not much is known about them or how they'll work in the DLC.

Though their behavior is not fully known, the drowned may act like normal zombies, slowly approaching the player and attacking them. They may also sometimes spawn with Tridents, which they use as ranged weapon. They will probably have an armored variant as well. Drowned are seen swimming with their legs tilted back, somewhat like a vex.