This article is a work in progress.
Please help in the creation of this article by expanding or improving it. The talk page may contain suggestions.
Note: Achievements relating to difficulty. Include Artifacts. Fill infomation 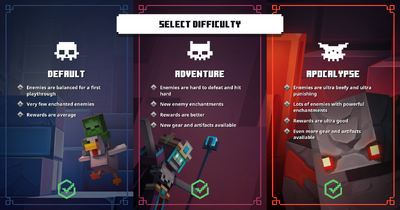 Difficulty is a mechanic in Minecraft Dungeons that influences the balance by affecting how challenging the gameplay is.

There are three sequential difficulty modes: Default (), Adventure (), and Apocalypse (). Defeating the boss at Obsidian Pinnacle and completing it on a difficulty setting opens the next mode. On higher difficulty modes, Mobs are harder to defeat, more numerous, and Enchanted Mobs occur more often with new enchantments. However, equipment of higher power is rewarded to players as they traverse higher difficulties, alongside with new gear and artifacts drops and increased experience from mobs. Players can switch between unlocked difficulty modes at any time from the Select Mission Map, retaining all their equipment, and can re-play accessible missions at lower difficulty modes.
The three difficulty modes are assigned a skull icon that is used to depict them, with each skull becoming more menacing, possibly to represent the increased challenge provided with each difficulty. They also have their own colour, mob, and sound cue to represent the difficulty in the Difficulty Mode selection screen, with Default using blue, a Chicken Jockey mob, and a Chicken sound , Adventure with pink, a Necromancer mob, and a Vindicator sound, and Apocalypse with red, a Redstone Golem mob, and a Ghast Scream sound.

The higher the Threat Level, the higher the minimum and maximum power of weapons, armors, and artifacts that can drop during and after the mission. The number of enemies and the damage they inflict in a mission also increase. 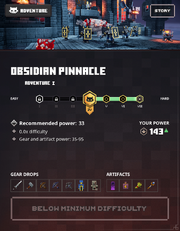 Minimum Threat Level for Obsidian Pinnacle at Adventure Difficulty is shown to be Adventure IV. Players cannot enter the mission at a lower Threat Level than the minimum.

Some missions have a set minimum Threat Level. The only mission with no adjustable Threat Level is Squid Coast, the tutorial mission, which is always set at Default I and is inaccessible when set to Adventure or Apocalypse diffculty modes.

Apocalypse Plus is an extension upon the existing Apocalypse difficulty mode that aims to be, especially at its most difficult state, an "impossibly hard"[1] challenge for players and encourage the use of "highly optimised" [2] equipment setups.
Consisting of 25 Threat Levels appended upon Apocalypse VII, sharing the Threat Level Slider, Apocalypse Plus applies stat enhancing modifiers to mobs and permit equipment classed as Rare to drop more frequently, in addition to increasing the maximum equipment power obtainable.

Players unlock the first three Apocalypse Plus Threat Levels after completing any mission at Apocalypse VII. To gain access to the next triplet of Threat Levels, the player must complete a number of Boss Missions at the higher end of the accessible triplet. The number of Boss Missions required increases, up to a maximum of 7, with each Threat Level Triplet. Each boss will only count once per Threat Level.
Boss Missions include: Pumpkin Pastures, Soggy Swamp, Redstone Mines, Fiery Forge, Desert Temple, Obsidian Pinnacle, ???, Overgrown Temple, Frosted Fjord, Lone Fortress, Gale Sanctum and Abyssal Monument. Interestingly, the Lost Settlement, Crimson Forest and Basalt Deltas aren't counted as boss missions despite them harboring one or two bosses in them.