This article is a work in progress.
Please help in the expansion or creation of this article by expanding or improving it. The talk page may contain suggestions.
Death Cap Mushroom 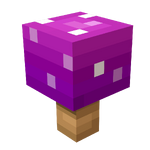 A Death Cap Mushroom is an artifact in Minecraft Dungeons. When used, it increases both attack and movement speed by 100%.

The Death Cap Mushroom greatly increases attack speed and movement speed upon use. It has a 30sec cooldown.