From Minecraft Wiki
Revision as of 18:19, 9 May 2021 by NineTreyBlud (talk | contribs)
(diff) ← Older revision | Latest revision (diff) | Newer revision → (diff)
Jump to: navigation, search
For The icy variant that is found inside Creeping Winter and Howling Peaks locations, see MCD:Icy Creeper.
For The charged variant that is found inside the Woodland Mansion Ancient Hunt location, see MCD:Charged Creeper.
Creeper 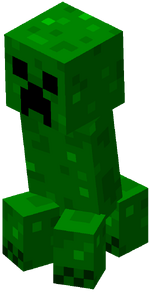 Creepers are hostile mobs found on various levels in in Minecraft Dungeons.

The Creeper's appearance is similar to its default version found in the base game, but the difference is being its color, where its skin is very dark green in color and lacks a lot of spots unlike its original counterpart.

Creepers also spawn when night falls, regardless of location, when at least one player dies in multiplayer.

Creepers approach the player and explode, killing themselves and dealing massive amount of damage to any nearby entities. One notable difference from the base game is that they can detonate while moving.

In Jungle Awakens, creepers become passive toward the player if an ocelot is nearby. They also run away if they are currently being attacked by an ocelot.