This article is a work in progress.
Please help in the creation of this article by expanding or improving it. The talk page may contain suggestions.
Cow 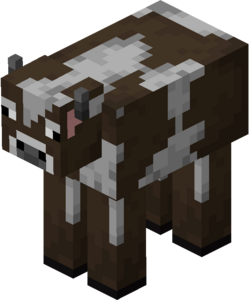 Cows are passive mobs that can be found on most levels in Minecraft Dungeons. They are usually killed for occasional item drops.

The Cow's appearance in Minecraft Dungeons is the same as its default version in the base game.

Issues relating to "Cow" are maintained on the bug tracker. Report issues there.