This article is a work in progress.
Please help in the expansion or creation of this article by expanding or improving it. The talk page may contain suggestions.
Note:
Corrupted Cauldron 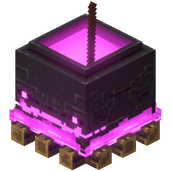 The corrupted cauldron, also simply known as the cauldron, is a boss in Minecraft Dungeons.

The corrupted cauldron is a living big cauldron with a big mouth and purple eyes. Its stick can move alone without anyone controlling it.

The corrupted cauldron has four behaviors. It does not move during its battle, even if struck by a Gravity-enchanted weapon.

The corrupted cauldron creates a ring of purple fire on the mossy cobblestone blocks around it, which deals heavy damage to anything that steps in it. Used occasionally.

The corrupted cauldron, after a stirring animation, conjures a variety of dangerous mobs to join the battle.

The corrupted cauldron doesn’t move during the battle. This can be seen as an advantage to the hero as the hero can consistently damage it. However, it can also be seen as a disadvantage as there are limited amount of strategies involved in defeating it.

A pink slime is a slime variant that can only be summoned by the corrupted cauldron found in Minecraft Dungeons. They attack with small purple projectiles and eventually disappear after ten seconds. Used occasionally.

Pink slimes are a medium-sized pink variant of the slime, which is found only when summoned by the corrupted cauldron. It has dark purple eyes and mouth, a purple inner core, and a light purple outer layer.

Unlike the normal slime, it is immobile, where it prefers to stay in one spot during the boss battle and attacking heroes from a distance. They don't have a jump behavior unlike normal slimes.

Issues relating to "Corrupted Cauldron" are maintained on the bug tracker. Report issues there.