This page describes content that is a part of the Creeping Winter DLC.
Cooked Salmon 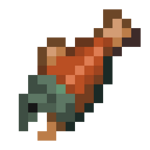 Cooked salmon is a food item in Minecraft Dungeons that heals 35% over 8 seconds. It appears in the second DLC, Creeping Winter

The cooked salmon most likely comes from the unused salmon, which was planned for Hidden Depths. However, Creeping Winter was developed long before it. It appears similar to it's vanilla variant, with a red body, grayish-cyan head, light red fins and mouth of the same color as the fins.

Cooked salmon can be obtained be obtained as a consumable in Frosted Fjord, Lone Fortress, and Lost Settlement.