This page describes content that is a part of the Echoing Void DLC.
Burning brew 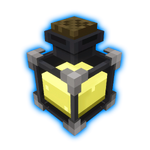 A burning brew is a potion that can be found within the echoing void DLC of Minecraft Dungeons.

A burning brew is mainly obtained by defeating mobs, and opening chests.

Drinking burning brews grants the hero the burning effect, which damages nearby enemies but does not burn the hero.