This Minecraft Dungeons article is a stub.
You can help by expanding it.
Bonus Shot 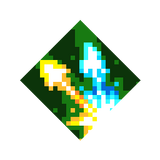 Bonus Shot is an enchantment in Minecraft Dungeons that, upon firing a bow, also fires a second shot toward a nearby enemy. The second shot always deals less damage than the primary shot. The amount of damage the second arrow deals increases with each tier.