This article is a work in progress.
Please help in the expansion or creation of this article by expanding or improving it. The talk page may contain suggestions.
Note: Merchants and damage stats.

This page describes content that is a part of the Flames of the Nether DLC.
Blast Fungus 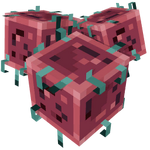 Blast Fungus is an artifact in Minecraft Dungeons that was added in the Flames of the Nether DLC, used to detonate nearby mobs in a select range.

When used, Blast Fungus sprout out, spread in different directions, and explode, dealing damage to any target within its range. It acts similarly to the MCD:Scatter Mines, with the exception that they detonate faster.