The blacksmith is a camp merchant that can upgrade the hero's items. It appears in the camp after being rescued by the hero in Redstone Mines.

The blacksmith resembles the original game's armorer villager, however, the eyes covers on the mask are bright purple, the metal mask is now covering their eyes, and the apron has a bright purple pattern in the middle. The clothing does not have sleeves. The captured blacksmith appears similar to the blacksmith, though its mask is shown to be be above the eyes, revealing green eyes.

The blacksmith can upgrade items in exchange for emeralds. To do this, the hero must sacrifice the item to the blacksmith. After completing three missions, the hero gets the upgraded weapon. The power level of the upgraded item is determined by the difficulty of the three missions the hero completed as well as the hero's power level while being upgraded. Although all enchantments on the item are removed, the choices of available enchantments are the same as those of the original item. If enchantment points were spent on that item before, the hero receives them all back after sacrificing item to the Blacksmith. 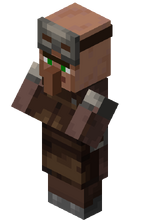 The captured blacksmith is the version of the blacksmith held in captivity within the Redstone Mines. When the heroes free it, they can access the regular blacksmith in the camp.

The old texture is currently used for the captured blacksmith when heroes free it from its captivity in the Redstone Mines.

Prior to the Creeping Winter update, the captured blacksmith was a merchant who would sell heroes a random weapon or armor set that would be equivalent to their power level, it would be in the camp along with the wandering trader, who would sell artifacts. It would appear in the hero's camp after beating the Creeper Woods mission. It was overhauled in the Creeping Winter update and was made to upgrade items instead of giving them, along with its appearance being changed. Its original functionality has been replaced by the mystery merchant.

This section needs expansion.
You can help by expanding it.