This Minecraft Dungeons article is a stub.
You can help by expanding it.
Baby Zombie 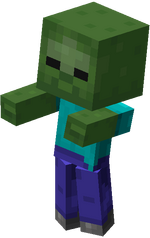 Baby Zombies are a hostile mob and baby variant of the zombie found in Minecraft Dungeons.

Baby zombies also spawn when night falls, regardless of location, when at least one player dies in multiplayer.

The baby zombie resembles the normal zombie but smaller and more agile. They can spawn riding a chicken. This variant is known as the chicken jockey. They can also ride on each other and become a mob with six small zombies riding on a chicken and it's called the Chicken Jockey Tower.

Baby zombies attack the player if seen and deal a small amount of damage. They are faster, have higher health and hit more often than the normal zombie but deal less damage per hit. After hitting, they retreat. 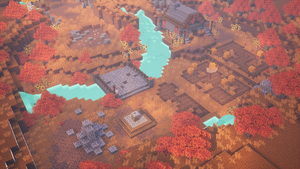 The arena where the The Tiny Scourge is summoned and battled at.

The Tiny Scourge is the ancient variant of the baby zombie encountered during Ancient Hunts with the minimum offering of . The ancient resides within a Pumpkin Pastures-themed arena and possesses, at minimum, the following enchantments:

Upon defeating The Tiny Scourge, a gilded variant of the Daggers, Soul Robe, Thief Armor or any of their uniques will drop as a reward.

Some of the sounds may have some speed and pitch multiplier applied in game, there are no specific sound files for "Baby Zombie".

Despite it being smaller than it's adult counterpart, it has more health.