This page describes content that is a part of the Flames of the Nether DLC.
Baby Ghast 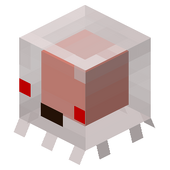 The Baby Ghast is a pet mob in Minecraft Dungeons obtained through the Flames of the Nether DLC. It is purely cosmetic and does not attack enemies.

The Baby Ghast is a juvenile form of the ghast. They are characterized by having small white translucent bodies with a red core inside, a small mouth, red eyes, and small tentacles. The whole body of the Baby Ghast is smaller and almost the size of the player's head, and it also disappears when the player is away and appears when they are close, making it similar to a ghost.