This article is a work in progress.
Please help in the expansion or creation of this article by expanding or improving it. The talk page may contain suggestions.
Axe 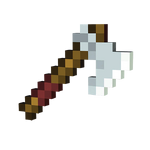 An axe is a melee weapon that can be found within the various missions of Minecraft Dungeons. Its unique variants are the firebrand and the highland axe. It also has some mob exclusive variants, such as ladles equipped by vindicator chefs, mountaneer axes equipped by mountaineers, tough mountaineers, and rampart captains, and gold axes equipped by tough piglins and tough zombified piglins.

Issues relating to "Axe" are maintained on the bug tracker. Report issues there.