This article is a work in progress.
Please help in the expansion or creation of this article by expanding or improving it. The talk page may contain suggestions.
Note: Health in Difficulties. correct sounds

This page describes content that is a part of the Flames of the Nether DLC.
Armored Piglin Hunter 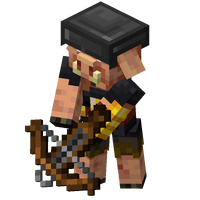 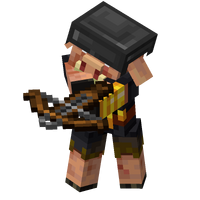 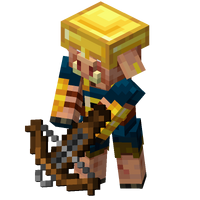 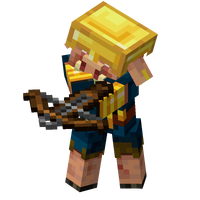 The Armored Piglin Hunter is an armored variant of the piglin hunter found in the Minecraft Dungeons DLC Flames of the Nether.

The Armored Piglin Hunter has two variants, the first variant is seen wearing a black armor set similar to the Armored Piglin, one gold guard on its left arm and supporting a netherite helmet. The second variant wields a bluish armor set, two gold guards on its arms and a gold helmet, both of which uses a crossbow.

Armored Piglin Hunters, just like their unarmored counterparts spawn with a crossbow in which they use to shoot arrows at the player, in the exact same way, and being armored means they have more health than their unarmored counterparts. unlike Diamond Armored Pillagers and Diamond Armored Vindicators both Armored Piglin Hunters can be stunned by normal attacks.