This article is a work in progress.
Please help in the expansion or creation of this article by expanding or improving it. The talk page may contain suggestions.
Note:
Arch-Illager (Archie)

The arch-illager known by his birth name as Archie,[1] is the first main antagonist of Minecraft Dungeons. He is the founder and leader of the illager empire in the game, and is a proxy for the orb of dominance to carry out its goals.

Before the events of the game, Archie was an exile from his illager tribe, repeatedly searching for a village to call home, only for the villagers to reject him, after getting in a scuffle with five heroes. He was seen being driven out of a village on the squid coast in the opening cutscene of the game.

Eventually, after a long time of searching, Archie stumbled upon a mountain cave containing the orb of dominance. The orb made promises to give Archie anything he could ever want. It repeatedly told Archie that it was his destiny to rule the world. Although he denied this, Archie would go on to unite all of the illager tribes under one banner, taking the title of arch-illager in the process. He then used his army of illagers to raid the villages that shunned him, taking the villagers as slaves.

The hero(s) would then make it their mission to stop the arch-illager.

During his reign, he would collaborate with the evil witches of the soggy swamp to obtain large potion supplies as well as the Nameless One of the desert temple to obtain the undead army. He would also order the development of the redstone mines to use his villager slaves to mine redstone, and construct the fiery forge to refine the gathered redstone into redstone golems and the redstone monstrosity to enforce his rule. Eventually, the arch-illager would also attempt to betray the Nameless One, launching a raid on the desert temple to try and take the Nameless One’s staff to gain the ability to summon the undead army for himself. Each of these plans, however, would be foiled by the heroes.

Additionally, the arch-illager repeatedly appears in the game to summon illagers to attack the heroes, which occurs less often as the game progresses.

After the heroes finally reach him on the highest point of his castle, the arch-illager fights the hero(s) himself. After having been heavily wounded, Archie is sucked toward the orb of dominance, which proceeds to manifest itself as the heart of ender. Once enough damage has been done to the embodiment, the heart of ender dissipates, rendering the orb of dominance extremely unstable.

Finally, the heroes find the arch-illager struggling to contain the orb of dominance, a few moments before it shatters, knocking Archie down and relieving him of its control. Without the orb of dominance to give him power, Archie becomes afraid of the approaching heroes. However, they unexpectedly offer kindness and help him up. Archie then celebrates the destruction of the orb of dominance, and by extension the persona of the arch-illager, with the heroes. However, The orb of dominance wasn't fully destroyed. Its shards of dominance caused problems like the events of Jungle Awakens, Creeping Winter, Howling Peaks and Hidden Depths, eventually leading to some endermen finding the reformed remains in a cave bringing it to a stronghold and entering a mysterious portal. Later the heroes must fight against the vengeful heart Of ender. A shard is not in the Flames of the Nether DLC however.

In the opening cinematic, Archie has ragged and teared clothes and is holding a torch. When he is crowned as the arch-illager, he has blue robes that are similar to the evocation robe, a large necklace with a ruby on it and a crown with a diamond and a ruby on it. He also carries a staff to hold the orb of dominance. The arch-illager is also the only illager to have a horizontal head and a smaller height. In the ending cinematic, the arch-illager is seen with what appear to be bruises or blood on his face. In the arcade edition, the top of the arch-illager's crown lacks a texture, only appearing black.

The arch-illager has seven behaviors. If a hero or summon comes too close to him, he begins repeatedly teleporting around the arena and firing blasts after each teleport. His health pool is the second lowest of any boss in the game, although this is mitigated by the deadly heart of ender battle that takes place after his health is depleted. Additionally, the arch-illager, when he isn't a boss, flies around summoning bosses and battles to try and thwart the hero's efforts to stop him.

The arch-illager fires three purple energy blasts in a horizontal swath toward a random hero or summon. Deals a small amount of damage if it hits (sixteen damage per energy blast on Default). Used extremely often.

When a hero comes within close range of the arch-illager, usually melee attack range, and the hero gets hit by one if his energy blasts, the arch-illager teleports four or five times[verify] in a random area around the hero to avoid taking much damage. Similarly to the enderman, the arch-illager can also hide in teleportation and not reappear instantly. The teleport sound is identical to that of the illusioner miniboss that is found in the Creeping Winter DLC when doing a mirror move.

Defeated in a whirlwind

Once the arch-illager has taken enough damage, his staff slips out of his hands, sucks him in, and absorbs him while transforming into the heart of ender.

Since the arch-illager is not much of a warrior, he is capable of summoning a group of illagers to assist him, usually a circle of ten to twenty vindicators around the hero.

The arch-illager can also summon a line of twenty pillagers through the center of the arena. 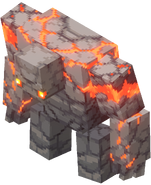 The redstone golem is a smaller and weaker version of the redstone monstrosity, with more prominent cracks, no horns or visible mouth, and two slime-like eyes. There is also a block of redstone attached to its back and two inside both its upper arms. It is made from cobblestone and redstone blocks, with redstone dust wiring it.

The redstone golem is the strongest mob summoned by the arch-illager. In normal Minecraft Dungeons, it behaves the same as it’s powerful mob counterpart. However, in the arcade edition, it has an extra attack and different mechanics.

When the hero gets in range, it swipes it’s arm towards the hero, knocking them back.

When close to the hero, it smashes its arms on the ground. This attack can also damage nearby mobs.

This causes four mines to appear in front of the golem which explode instantly, damaging any pets or heroes near it. The golem cannot move when summoning mines. In normal Minecraft Dungeons, it summons multiple mines around it that linger for a bit instead.

The arch-illager’s origin story is described in the canonical novel The Rise of the Arch-Illager.[1]

The arch-illager, originally known as Archie, was born within a woodland mansion under the leadership of Walda, an evoker. His parents died when he was young, leaving him orphaned at a young age. Forced to grow up alone, Archie had a rough childhood, hardly having any help from his illager tribe and being the target of harassment from Thord, an evoker. Sometime early in his life, he developed ideas that if the illager tribes of the overworld banded together, they could defeat the heroes that constantly hunted them. Due to being an outsider, the other illagers disregarded his radical beliefs as they went against the common ideology that illagers are power hungry and combative by nature, and that they only follow the strongest illager as their leader. The other illagers believed that if they ever tried to unite, it would just be coup after coup.

Archie’s life takes a turn when, during a raid, a hero named Karl, known as "Smacker", completely obliterates Archie's fellow illagers, except for him and Thord, who blamed the incident on Archie for not helping, even though he was told to stay out of the fight. After they returned to the woodland mansion, Thord reported to Walda of his view of the incident. Thord’s lies trigger Archie to react by violently attacking Thord in front of Walda. Because of his actions, She banished Archie from the tribe forever.

Eventually he arrives at a nearby village on the squid coast. They are distrustful of him, but he is able to convince a villager named Yumi to take him in after he proves his credibility. He lived in the village for anywhere from a month to a year before "Smacker" returned. The village spokesperson, Salah, got the hero’s attention drawn to Archie. "Smacker" threatened to kill Archie, since he could never feel safe in a village if an illager was there, no matter how small. Yumi wanted him to stay, but she had no choice but to tell Archie to run so "Smacker" couldn't find him.

After a long time of searching, he found the orb of dominance, promising to give Archie anything he could ever want. It repeatedly told him it was Archie's destiny to rule the world, although he denied this. Archie would unite many illager tribes under his rule, taking the title of the arch-illager in the process.

The orb constructed Highblock Keep as Archie’s home, and gave him six redstone golems to protect him. However, these golems could not last forever, so he'd need a forge to make more, and a mine to gather redstone, and he'd need workers to do it. The illagers were willing to work for him; at least once the orb proved that it would not allow anyone to take it from Archie. The orb insisted they would need to attack the villages of the continent so the militant illagers would not get bored.

It was a downward spiral, as one thing required another, each more evil than the last. He eventually defeated Thord, who attempted to betray him, and despite how he tried to convince Yumi, his only friend, to join him, she refused. Yumi almost got him to quit the entire thing and just go back to living in the village, but the orb, now partially controlling Archie's thoughts, would not let him. With the new title of the arch-illager, Archie, under the influence of the orb, vowed to make all of the overworld suffer for taking away the peaceful life he could have had...

Archie seems to have been quite cowardly before he was corrupted by the orb of dominance. He often would not run into the face of danger. However, in certain situations, he has the potential to be a strong warrior. He also is shown to have violent tendencies in certain situations, such as when Thord causes him to get exiled, and when Salah causes Smacker to get him thrown out of the village. At one point, he briefly considers executing Walda for her part in Thord’s betrayal.

Appear in other maps[]

Issues relating to "Arch-Illager" are maintained on the bug tracker. Report issues there.