This page describes content that is a part of the Hidden Depths DLC.
Ancient Guardian 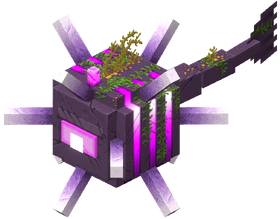 The ancient guardian is the final boss of the Hidden Depths DLC.

The ancient guardian is the Oldest guardian among all of the Guardians, dwelling within the ocean monument where the story of the Hidden Depths DLC unfolds. After the shattering of the orb of dominance, one of its shards landed within the hidden depths of a deep ocean. As the ancient guardian was guarding the monument it inevitably discovered the shard and became corrupted by it.

With the addition of its newfound power, the ancient guardian got emboldened in expanding its territory. It began to spread its corruption to a nearby ravine, enraging the ocean currents. At the time that the heroes begin to descend the ocean depths, the corruption of the ancient guardian begins spreading throughout a coral reef known as Coral Rise, wreaking havoc on the nearby small islands.

The ancient guardian looks like elder guardian albeit much bigger. and has a predominantly dark purple body as well as three pink stripes. All of its spikes are a light purple to white gradient, and its eye is pink in color with a white iris. On its back are a few patches of algae, coral and seaweed, with some on its tail. A shard of the orb of dominance is lodged in front of the algae. Its face is full of cracks and a long scratch is seen across its eye.

When the hero reaches the arena, the ancient guardian enters by bursting through a wall. After taking notable damage, it can swim away from the arena to avoid further damage. In addition, it has five attacks:

The ancient guardian can attack nearby heroes or summons by piercing them with its spikes, which creates a high-damage shockwave.

The ancient guardian sometimes pops out its spikes as a means of defence. Attacking it with a melee weapon results in the attacker taking some damage back in a similar manner to the Thorns enchantment.

The ancient guardian is capable of firing a yellow beam at its target, which behaves the same way as its weaker counter parts but deals more damage. After doing this attack, the ancient guardian retracts its spikes, and can be attacked without suffering thorns damage.

The ancient guardian can summon guardians to assist itself during battle. It usually summons about three guardians near a hero, but this attack sometimes spawns an elder guardian instead. It cannot spawn anymore elder guardians if there is already one alive. 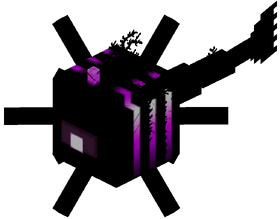 A fake ancient guardian is the version of the boss that is seen before the boss fight.

The fake ancient guardian is a shadowy version of the ancient guardian seen looming over the player before arriving in the Abyssal Monument. Its whole body is concealed in a dark shadow with the exception of its eye, back stripes, and the orb shard which glow a faint yellow. Its spikes are all fully black.

Attacking the fake ancient guardian eventually results in it disappearing and dropping an item from the Abyssal Monument loot table, see below: 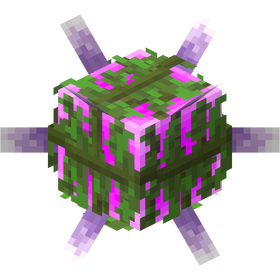 A biomine is a type of guardian-shaped mob that the ancient guardian summons every so often when coming into the arena.

The biomine is a sea mine-like object consisting of a purple core surrounded by seaweed and six purple spikes jutting out from the core. When it explodes, it emits green poisonous gas.

When summoned, biomines explode shortly afterward, though it cancels this attack after becoming sufficiently damaged. When the biomines explode, they leave behind a temporary poison cloud that deals continuous damage to nearby heroes or summons.

This page would benefit from the addition of more sounds.
Please remove this notice once you've added suitable sounds to the article.
The specific instructions are: Add the Shadow sound