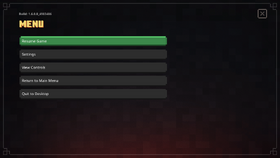 1.6.0.0 is an update to Minecraft Dungeons released on November 17, 2020, which added cross-platform features, among other changes.[1]