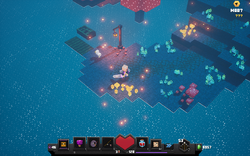 The mission ???, originally known as Mooshroom Island is a secret mission in Minecraft Dungeons. Unlocking it requires finding all runes in the game. To start the quest, the hero is required to have beaten Obsidian Pinnacle. The location is similar to the Mushroom Fields biome in vanilla Minecraft. Mooshrooms are the only normal mob that spawns, while the Mooshroom Monstrosity appears as the final boss.

Upon completion of Obsidian Pinnacle, and then activating the button in the back of the church at the camp, several secret areas appear where nine runes must be collected before the hero can obtain a secret scroll in a hidden room of the church.

The story description of this mission is known as "Moo?", and the story and objectives are all "Moo" with different punctuation, aside from the final objective, "Leave the Island".

As soon as the heroes complete all the runes, they find a doorway leading to a mysterious land. When they go through, they find an island filled with Mooshrooms, giant mushrooms, and pop flowers. They will have to escape the island, while killing the mooshrooms along the way. While the heroes are escaping, they run into the Mooshroom Monstrosity, a shroom infested version of what appears to be a Redstone Monstrosity. When the heroes defeat it, they find a boat and raft back to the Mainland.