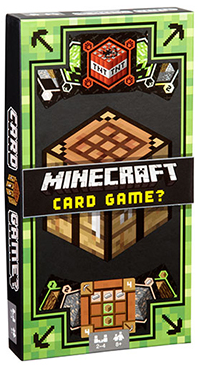 A set of the Minecraft Card Game includes[2]:

There are also four card holders, in which one is to be used be each player.

The objective of the game is to be the first player to earn the most points.

Shuffle all resource cards, and then deal them face down into five piles of fifteen cards each. Then, turn each pile over so that all cards in each pile are face up.

Next, shuffle the craft cards and then deal them into four piles of six cards each, with the "crafting" side up. One card is left over, which is used for the discard pile.

Cards are put into the discard pile if any of the following occur:

A player may perform two actions during their turn, even if they are the same action. Play proceeds to the next player once the other player has completed their actions. There are three types of actions a player can perform:

If a player desires a craft card but is unable to pay for it, they are allowed to place their card in "Reserve", which simply involves taking the craft card they want and placing it in their card holder. Then, when the player has mined the required resources, they are allowed to use an action on their turn to trade the resources in and get the card out of "Reserve", which is then placed with the player's other craft cards.

Each tool a player "crafts" has a special power. A player may use the powers at any time, and using one does not count as an action. When a tool's power is used, the player is to flip the craft card face down to show that the tool was used. Points on the card are counted even if the tool is used. The tool can only be used once. The tool powers are as follows:

End of the game[]

The player who accumulates the required number of points wins, depending on the number of players: