This page describes an edition of the game that has been officially discontinued.
This edition is no longer updated or available for download.
Minecraft 4k 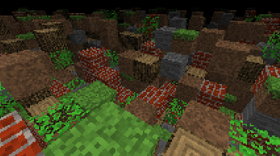 Minecraft 4k was an edition of Minecraft developed for the 2010 Java 4K contest, where the entry games were required to be within four kibibytes (4096 bytes) in size.[1]

The initial version, released on December 2, 2009, was more limited than any other edition of Minecraft ever released to the public, including the pre-classic version that is available from the Minecraft Launcher. An update on December 4, 2009, changed the controls and added widescreen, more blocks, and the ability to place and destroy blocks.[2]

The original page hosting the game was removed in November, 2014. Its archive can still be accessed using the Wayback Machine. The executable is also available on the Internet Archive.

The same 64×64×63 block world is generated every time the game is loaded. The only blocks in the game – air, grass block, dirt, stone, bricks, wood, and leaves – are scattered throughout the world. No mobs exist.

The initial build of the game only has one type of block, which uses a XOR fractal as a texture.

An invisible wall surrounds the world, preventing the player from escaping, similar to invisible bedrock or an old world.

The player can move around using standard WASD controls, as well as jump using Space.

The game lacks any sort of options menu or HUD.

The graphics appear pixelated as a result of the game rendering at a low resolution. Even when running at a higher resolution, the game does not scale the resolution properly and the noisy appearance is retained. Block textures are similar to those used in Classic, as Classic 0.30 (Creative) was the most recent version of Minecraft at the time. Most blocks appear noisier than their Minecraft counterparts, although some blocks, especially stone, are a lot different. The sky is black due to the lack of a skybox.

When hovering the cursor over a block, the outline of the block is thick and white, as opposed to Minecraft's thin gray block selection outline.

The first version of the game has a single non-air block.

In the second version, block IDs are stored with four bits, resulting in 16 possible IDs. The majority of these are filled in by slightly differently textured dirt.

There are a total of 16 block IDs in the game. However, not all of them are used by unique blocks. The remaining, unused block IDs are simply dirt blocks.