Minecraft: PS4 Edition was announced at Sony's exhibit at Gamescom 2013. It was released on September 4, 2014 for the PS4 and was made available for crossplay with Bedrock Edition on December 9, 2019.

The game is similar to the PS3 Edition but has further enhancements such as increased chunk render distance; world sizes of up to 5120×5120 blocks (36 times larger); amplified worlds; and DualShock 4 touchpad support. Worlds made on the PS3 or PS Vita editions can also be transferred onto this edition could be expanded upon until the feature was terminated on April 15, 2020.

The PS4 Edition can be played on the PlayStation Vita through Remote Play.

As of 2018, there are numerous skin packs, texture packs, and mash-up packs. Texture packs include Steampunk, Pattern, Fantasy, Cartoon, Plastic, City, Natural, and Candy. As for skin packs, there are several spanning different genres of TV, movies, and video games including The Simpsons, Mighty Morphin' Power Rangers, Doctor Who, Star Wars, Final Fantasy XV, Moana, and Stranger Things as well as several original skin packs. The mash-up packs (which include the skin pack, texture pack, and a special themed world to explore) include Festive, Halloween, Skyrim, Mass Effect, LittleBigPlanet, Egyptian Mythology, Norse Mythology, and Greek Mythology. Mini-Games have also been implemented into the PlayStation 4 Edition, allowing players to compete online in many different styles of competition on several different maps made by the developers. There are Battle Mini-Games and Glide Mini-Games.

The tutorial spawns a player near an unfinished house that they need to complete in the tutorial. They have to follow all the steps in the tutorial in order to be given the rest of the seed. A player can also choose to skip it. After the tutorial, a player can then go into an area that gives them examples of Trading, breeding, enchanting, ender chest, redstone use, homes, and more. There is also a small castle that can light up if a player can fix it. There is a nearby village that is incorrect as well as a ship with a Creeper face on it in the distance.

As of the Buzzy Bees Update, the tutorial no longer exists.

As of the Buzzy Bees Update, the PlayStation 4 Edition got cross-platform support and became part of the Bedrock Edition.[1][2] 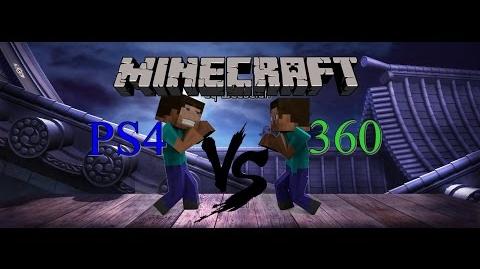